Affect or effect? Here’s how to remember which is which 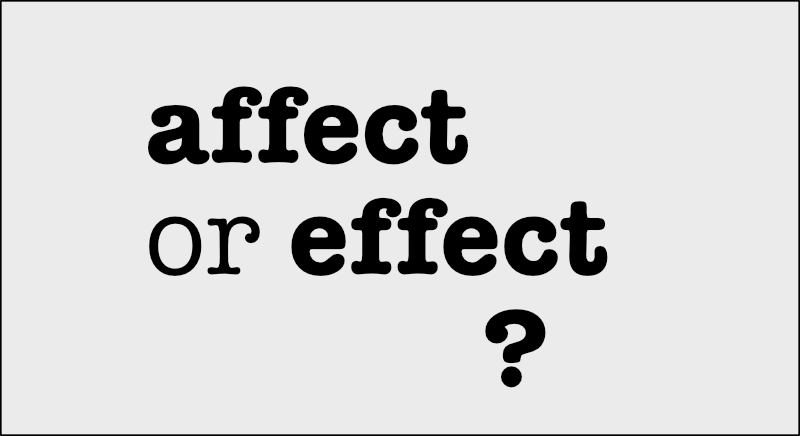 “Affect” and “effect” are different – so it’s vital to get them right. And no, relying on the word “impact” instead is not OK …

If there’s ever a spelling issue that many people struggle with, it’s telling the difference between “affect” and “effect”. In the UK alone, it’s typed into search engines tens of thousands of times a year.

But to get it right every time, all you need to do is recall some simple rules. Here’s what you need to remember if you find it tricky:

Most of the time, “affect” is a verb. So If you “affect” someone or something, that’s an Action that you’re taking. And it’s ’appening right now. So it takes an A.

“This cyber-attack is affecting our servers.”

“We are severely affected by the crisis in social care.”

“This doesn’t affect me.”

To affect is to Act on something. Spell it with an A.

On the other hand, “effect” is a noun. It’s used to describe the situation when the action has Ended. And it takes an E.

“This cyber-attack is having an effect on our servers.”

“This illness has serious effects on the body.”

“The effect of this change is catastrophic.”

The effect is the End. Spell it with an E.

Now, let’s get practical. Some people like to skirt around the whole “affect v effect” problem – and just use the word “impact”. After all, the verb “impact” and the noun “impact” are the same – so it solves the problem, right?

But it doesn’t always work, so you can’t rely on it. Sure, it solves the issue of spelling. But it creates a new problem, which is that you’re using a word which is tonally different, and sometimes carries a different meaning. And when it comes to writing, tone and meaning matter.

“Impact” as a noun

The noun “impact” is much more hard-hitting than the word “effect”. It has the feel of its literal meaning – in other words, of the moment when something slams hard into something else. So it’s not always suitable when you’re talking about a slight change, or an abstract effect.

Of course, it sometimes works. Charities, for example, write “impact reports” for their donors, not “effect reports”. That’s precisely because they want to create a sense that what they do is hard-hitting and makes a difference.

And what about when you want to talk about “after-effects” or even “special effects”? These usages can’t be replaced by “impacts” in the same way.

“Impact” as a verb

“Impact” as a verb is even more controversial. Sure, the verb “to impact” exists, and has done for centuries. But there are those who actively dislike it, especially when it’s used figuratively.

According to US lexicographers Merriam-Webster, this usage became suddenly more popular in the late 20th century – perhaps contributing to a sense of dislike among people who resent the brash business jargon that became popular at about that time.

To me, the issue again is that to “impact” carries the sense of slamming hard, like a meteor striking the earth – and that’s often tonally wrong.

Many editors will play it safe, and edit the verb “impact” to “affect” – though perhaps this will change over time, as the verb loses its sense (however unfair) of being a brash new usage.

Do you remember how, at the start of this article, I noted that “affect” is a verb and “effect” is a noun – most of the time?

Unfortunately there are other meanings of the two words where the situation is reversed. Yes! Language, eh? It always has little tricks and traps to trip you up.

“Effect” as a verb

There is a common special case where the word “effect” is a verb: when you want to say “to effect a change”.

That’s correct – for some reason you “affect a situation”, “affect a person” (both in the sense of “impact”), but you “effect a change”.

Of course, this is a slightly different usage to the verb “affect”. The direct meaning of “to effect” as a verb is not “to impact”, but to “to bring about” or “to cause to happen”.

“Affect” as a noun

This is a much less common usage and, for most of us, can be safely ignored – because it’s a term in psychology which comes from German.

“Affect” is a noun mainly in the sense of what you do with your face or body when you experience an emotion.

(I have to check this every time, as it’s not a word I ever have to use except in the context of spelling rules. But essentially, an “affect” is a specific type of “effect” – and somewhere along the line the spelling has probably changed because it comes directly from German.)

Unless you’re a psychologist, we’re probably in TL;DR territory at this point, so I’ll stop.