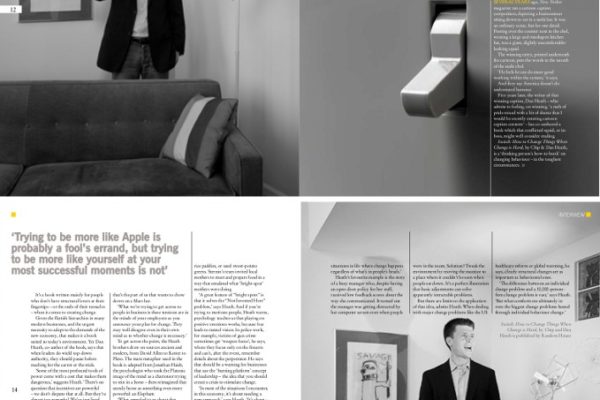 How do you make change happen in business? In this interview with author Dan Heath, targeted at Grant Thornton’s business clients, I discovered how behavioural tweaks at ground level often work better than incentives imposed from on high.

The interview outlines the theory behind Chip & Dan Heath’s book, Switch: How to Change Things When Change is Hard – which suggests that, with the help of psychology, managers have more targeted options available than the carrot or the stick.

The article, commissioned by the content agency Seven, uses Heath’s own words to advance the thesis – and to explore the limits to its application.

A switch anyone can flick
How do you make change happen? Chris Alden talks to Dan Heath, co-author of a new business book on the subject.

Several years ago, New Yorker magazine ran a cartoon caption competition, depicting a businessman sitting down to eat in a sushi bar. It was an ordinary scene, but for one detail. Peering over the counter next to the chef, wearing a large and misshapen kitchen hat, was a giant, slightly uncomfortable-looking squid.

The winning entry, printed underneath the cartoon, puts the words in the mouth of the sushi chef.

‘He feels he can do more good working within the system,’ it says.

And they say America doesn’t do understated humour.

Five years later, the writer of that winning caption, Dan Heath – who admits to feeling, on winning, ‘a rush of pride mixed with a bit of shame that I would be secretly entering cartoon caption contests’ – has co-authored a book which that conflicted squid, or its boss, might well consider reading.

Switch: How to Change Things When Change is Hard, by Chip & Dan Heath, is a ‘thinking person’s how-to book’ on changing behaviour – in the toughest circumstances.

It’s a book written mainly for people who don’t have structural levers at their fingertips – or the ends of their tentacles – when it comes to creating change. Given the flattish hierarchies in many modern businesses, and the urgent necessity to adapt to the demands of the new economy, that makes it a book suited to today’s business environment.

When leaders do wield top-down authority, says Dan Heath, they should pause before reaching for the carrot or the stick.

‘Some of the most profound tools of power come with a cost that makes them dangerous,’ he suggests. ‘There’s no question that incentives are powerful – we don’t dispute that at all.

‘But they’re almost too powerful. We’ve just lived through two years of the aftermath of an incentives problem in America and the rest of the world: Wall Street traders had powerful incentives to do the things they were doing, so they did them.

‘Often you’re bringing a gun to a knife-fight by thinking about incentives or structural remedies,’ he adds. ‘Often, simple environmental tweaks can alter behaviour.’

Switch sets out a practical blueprint for behavioural change. The Heath brothers focus on a psychological conflict that they say happens in all of us: a ‘mental struggle’ between the rational and emotional parts of our brains.

‘What we’re trying to get across to people in business is: these tensions are in the minds of your employees as you announce your plan for change. They may well disagree even in their own mind as to whether change is necessary.’

To get across the point, the Heath brothers draw on sources ancient and modern, from David Allen to Kotter to Plato. The main metaphor used in the book is adapted from Jonathan Haidt, the psychologist who took the Platonic image of the mind as a charioteer trying to rein in a horse – then reimagined that unruly horse as something even more powerful: an Elephant.

‘What appealed to us about that metaphor was it gives you a vivid sense of scale,’ says Heath. ‘The Rider is the smart one, but the Elephant is the powerful one. In a disagreement, it’s the Elephant that’s going to win.’

You’d expect the bestselling authors of Made to Stick, the Heath brothers’ earlier book on how to communicate effectively, to have compelling stories to illustrate their point, and they do. A memorable story in Switch is that of Jerry Sternin, a Save the Children employee who, 20 years ago, tried to battle malnutrition among children in Vietnam with virtually no budget.

‘Sternin’s strategy,’ says Switch, ‘was to search the community for bright spots – successful efforts worth emulating. If some kids were healthy despite their disadvantages, that meant malnourishment was not inevitable.’

Some mothers in one village, Sternin found, successfully served children food in a greater number of smaller servings. Others collected prawn and crabs from rice paddies, or used sweet-potato greens. Sternin’s team invited local mothers to meet and prepare food in a way that emulated what ‘bright-spot’ mothers were doing.

‘A great feature of “bright spots” is that it solves the “Not Invented Here” problem,’ says Heath. And if you’re trying to motivate people, Heath warns, psychology teaches us that playing on positive emotions works, because fear leads to tunnel vision.

‘In police work, for example, victims of gun crime sometimes get ‘weapon focus’, he says, where they focus only on the firearm and can’t, after the event, remember details about the perpetrator. He says that should be a warning for businesses that use the ‘burning platform’ concept of leadership – the idea that you should create a crisis to stimulate change.

‘In most of the situations I encounter, in this economy, it’s about needing a new approach,’ says Heath. ‘It’s about – how do we do things in a new way with less money and more innovation? Those kinds of problems require creativity, problem-solving and an appetite for failure. And all of those things are precisely what would be shut down with an approach of fear.’

Yet there’s a third element to the Heath brothers’ blueprint for change: the Path that the Rider and the Elephant will take.

‘To begin with we started only with the Rider and the Elephant,’ says Heath. ‘It quickly became obvious to us that – wait a minute – there are lots of situations in life where change happens regardless of what’s in people’s heads.’

Heath’s favourite example is the story of a busy manager who, despite having an open-door policy for her staff, received low feedback scores about the way she communicated. It turned out the manager was getting distracted by her computer screen even when people were in the room. Solution? Tweak the environment by moving the monitor to a place where it couldn’t be seen when people sat down. It’s a perfect illustration of the idea that basic adjustments can solve apparently intractable problems.

But there are limits to the application of that idea, admits Heath. When dealing with major change problems like the US healthcare reform or global warming, he says, clearly structural changes are as important as behavioural ones.

In Switch, Chip and Dan Heath use the metaphor of the Rider (the rational brain) riding an Elephant (the emotional brain) on a Path (the road ahead). To create change, ‘direct the Rider’: following the ‘bright spots’ (working out what’s going well), then using that information to help ‘script the critical moves’ which ‘point to the destination’.

You also need to ‘motivate the Elephant’: ‘find the feeling’ by playing on people’s emotions, ‘shrink the change’ by breaking it into manageable pieces, and ‘grow your people’ by creating an identity around the change. Finally, ‘shape the Path’: ‘tweak the environment,’ they say, to encourage change; ‘build habits’ so that change becomes embedded; and ‘rally the herd’ of Elephants and Riders – building on the principle that when some move, the rest follow.

• Switch: How to Change Things When Change is Hard, by Chip and Dan Heath, is published by Random House