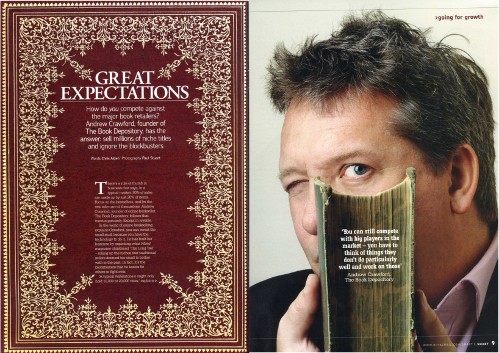 “There’s a rule of thumb in business that says, in a typical market, 80% of sales are made up by just 20% of items. Focus on the bestsellers, and let the rest take care of themselves. Andrew Crawford, founder of online bookseller the Book Depository, follows that mantra precisely. Except in reverse.”

In this article from 2008, commissioned by Redwood for Royal Mail’s ‘Smart’ magazine, I interviewed Book Depository founder Andrew Crawford about the ‘long tail’ business model which was then changing the face of bookselling.

Traditionally, booksellers only had room to stock around 20,000 books at most.

Now internet retailers such as the Book Depository could use technology to focus on the hundreds of thousands of books printed in the US and UK each year – the so-called ‘long tail’ – leaving traditional retailers to compete over the blockbusters on price.

This feature, which was targeted at Royal Mail’s small business customers, included bullet-point tips for SMEs on “how to build your business”, along with a case study of how Royal Mail helped the Book Depository meet its promise to deliver books for free.

Three years after the feature was written, Amazon would go on to buy the Book Depository; yet it survives as a brand and continues to target the long tail.